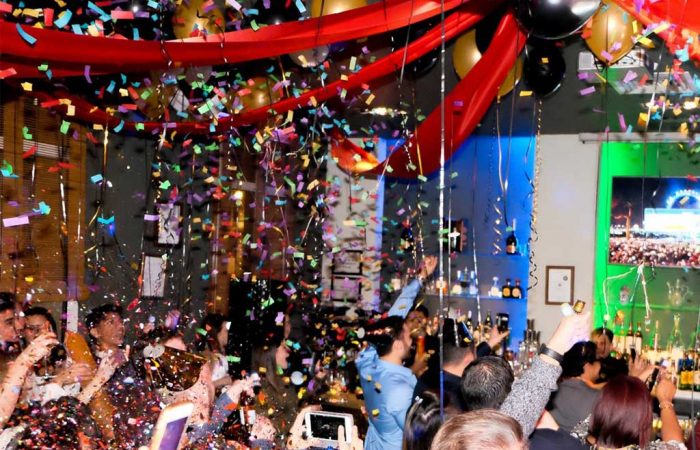 When it comes to New Year’s Eve it is always important to hire the right DJ. The right DJ does necessarily have not  be the best technical crabber, transformer or turntablist DJ. But they do need to have a full understanding of the type of crowd at the bar or nightclub they are hired to play at (by this we mean general genres of music policy and age groups).

DJ’s cash in exactly the same way on New Year’s Eve like London nightclubs do when they sell New Year’s Eve tickets. Some venues may not even charge entry on normal nights, but on New Year Eve they may ask for £20-50 a ticket and DJs charge double or triple. On average a London DJ may charge £250 (with no equipment) for a 5 hour set (at a bar or nightclub) in London but on New Years Eve DJs also price discriminate and charge double or triple that Saturday night price.

Why do London nightclubs, bars and DJs charge double or triple?

There is a reason for this, the bars and DJs try and make up for the quiet periods in January. Like many other businesses – prices are inflated when demand is known to be high and similarly drop prices when demand is low e.g sales in department stores after Christmas and in January. One thing that should be noted: DJs alongside everyone else working at venues on New Year’s Eve do in fact have twice to triple the amount of workload in comparison to any night of the year. The pressure is substantially higher as customers have paid a higher price entry for New Year’s Eve tickets and therefore their expectations are higher and the manager of the venue knows this too.

Even if the DJ is a resident of that club or bar they must always remember that the crowd on New Years Eve is going to have additional new customers upon the regulars. The DJ(s) must be prepared to variate their set and know exactly how to transition and maintain the crowd at all times (although that is their job anyway).

The MOST important thing the DJ does on New Year’s Eve – is that they host the night (or they have a mc who with them who knows how to host an evening). Hosting will dramatically change the entire crowds atmosphere! By shouting out to the locals, newcomers, tourists and regularly count down every 5minutes (from 11:30pm) till 12:00am immensely picks up the energy. The DJs can even control the way the bar queue is regulated by telling customers what is happening to (if they want to?). But Djiing is not about a power trip or manipulation. It is about creating an atmosphere and making people have a good time which will keep the customers in the venue (possibly spending more at the bar) and also make them return for another night.

Key facts for DJs in London to remember when playing at New Year’s Eve Parties:

Before the 12:00am countdown that is the real hard work for the DJ, they must continuously remind customers about the time in a quirky way. The DJ or host cannot be shy as their energy is injected into the crowd. On the countdown the hype is to its max and after the cheers and roar at 12:01, all DJs (even the best) will realise that for the next five minutes there maybe no atmosphere and managers should also realise this. Everyone will be either having drinks, shots, texting their friends and families. Then, from about 12:05 or 12:10am the party goes into full effect and it is the DJs job to make sure they put on their best set for the venue as that set will be remembered and talked about by all customers for the next month in January or for even longer.

Remember if the DJ is having a bad day or is inexperienced to host, this will affect the entire crowd and the staff working at the venue. Hiring the right DJ for New Years Eve is more important than any other night of the year. Don’t cut costs on a cheap DJ or take second best. Also, if you are looking to hire a London DJ on New Year’s Eve – then you must ask if they will host, bring a host or the venue manager (or promoter) should arrange someone to host the evening.