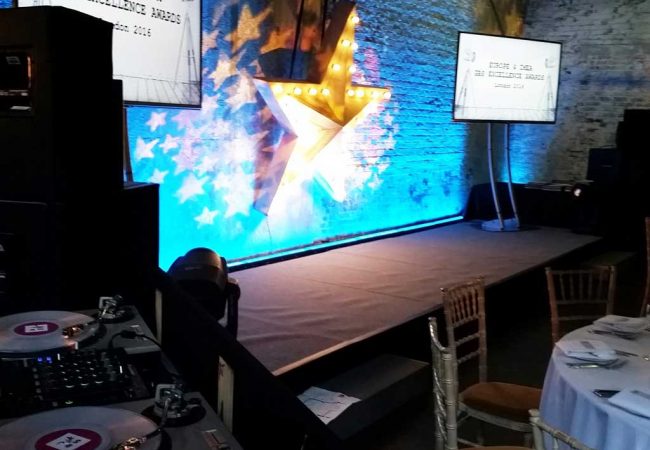 Event at MC Motors in Stoke Newington in 2016.

A turntable DJ was the P&G Gala Awards event held at MC Studios.

The DJ visited site before events six weeks in advance with main organiser of the P&G gala awards. Ran through the type of set up, client requested a turntable set up and listed genres of music and type of guests attending and their preference of music. Choice of music was 80s, 90s and disco music for the 90mins to 3 hour dancing after dinner party for 100 guests.

Set up was requested at 6pm to plug into AV company (they were not one of our recommended suppliers but in house for MC studios).

The event ran over a little which does happen frequently as there usually many topic talks to cover at corporate events. The DJ ended up playing a very thorough quick hitting party rocking set within the one hour.

The AV company hired provided the staging, TVs and speakers. The DJ set was the regulated the sound men and the lighting was set on auto chases and scenes for the dancing part of the event again by AV company.