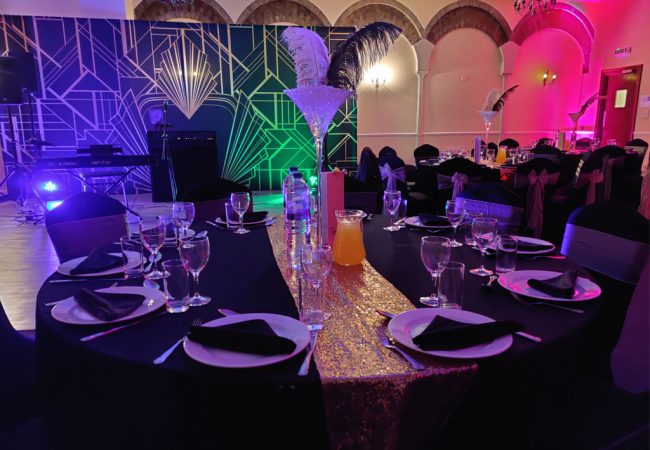 DJ arrived on site and the backdrop for the Great Gatsby Party wall backdrop was already laid in place for the band and DJ. The DJ provided and laid the wireless uplighters first and check colours along with brightness. All ok, switch off and recharge for extra battery life until 20mins before guests arrive.

Band: The Ryan McCaffrey Sessions have been performing together for several years in a variety of formats and have collectively performed on cruise ships, in London’s top nightspots such as Ronnie Scotts and The Jazz Café and were best suited for the Great Gatsby Party. The Ryan McCaffrey sessions have also played with some notable names from the circuit including Roberto Manzin, Alan Barnes, Clark Tracey and Trevoe Tomkins. They are available to hire as a solo to a five piece band featuring Emily Farrar on vocals.

DJ Set consisted of Old Skool R&B and UK Garage amongst the classic 90s party tracks and a double play for Candy for good measure.

Here's how It Went Down

accept
We use cookies to ensure that we give you the best experience on our website. If you continue to use this site we will assume that you are happy with it.Ok